Different people are able to control a pointer with different degrees of accuracy. Several things can affect this, including the hardware that is used and the person’s physical ability to use their hand and fingers. A person’s level of practice and confidence using the hardware and software in question is also a major factor.

Often (though certainly not always), geeks are able to manipulate a pointer with a high degree of accuracy. This is largely a result of practice, both in using a pointer and in using the specific software too. We’re happy ducking and weaving the little arrow when necessary. Habit tells us where the click target that we want will be. This often makes geeks quite tolerant of software which requires a high-degree of pointer control. We don’t mind nested menus or tiny close buttons.

A high level of pointer control is not a sure thing though, and a user interface which requires a high level of pointer control will frequently be an extremely painful thing to use. People using it will frequently make errors. Some of these will be minor, such as sending the pointer to the wrong place. Others will be major, such as clicking the wrong target. And the preponderance of low quality pointing devices means that peoples’ pointer control is often lower than it used to be. Netbooks are a major factor here. Their touchpads can be extremely low quality.

GNOME 3 has been designed to ensure that it can be used by those who have a low level of pointer control, either because they are not well practised at using pointing devices or our software, because they might not have good control over the hand and fingers, or because they are using low quality hardware. This is one way in which GNOME 3 is easier to use than GNOME 2. 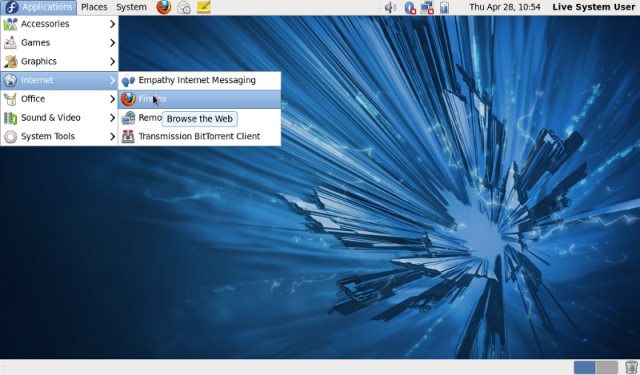 Launching applications in GNOME 2: can be tricky

One way that the pointer control demands of GNOME 3 were lowered was by avoiding the use of submenus. These present a number of challenges to those with low pointer control, including abrupt changes in the direction of pointer movement and narrow click targets. Considering that submenus were the principle way in which applications were launched in GNOME 2, this was a bad situation indeed.

Another aspect of the GNOME 3 design which lessens its pointer accuracy demands is the removal of the minimize and maximize buttons from titlebars. Users with a low level of pointer control will often accidentally select small targets which are grouped closely together, as is often the case with window controls. This is particularly dangerous when one of those buttons – close – has potentially destructive consequences. In GNOME 2, if someone wanted to minimize and missed the target, they could easily lose their work. This is no longer the case in GNOME 3, since maximization occurs by dragging a window’s titlebar. 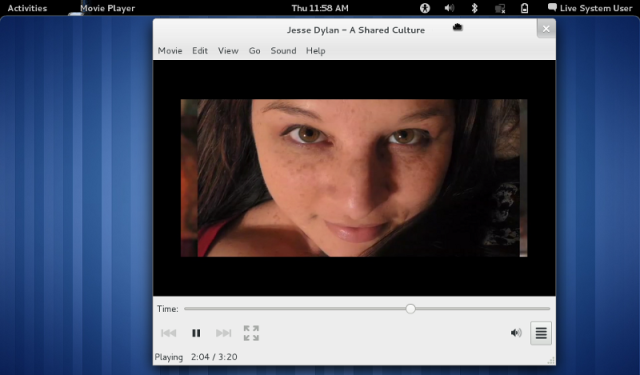 Maximising in GNOME 3: the pointer can stay well away from the close button

There are many other aspects of the GNOME 3 design that make it easy to use for those with a low level of pointer control: the hot corner, the use of the windows button, the ability to quickly perform a lot more actions without the need of a keyboard, and more.

Last weekend, I conducted an experiment to test the difference between the pointer control demands of GNOME 2 and GNOME 3. I borrowed a friend’s netbook (a Dell Mini 10) – which has a low quality touchpad – and attempted a range of tasks using both GNOME 2 and 3 (using Fedora 14 and 15). To lower my ability to control the pointer even further, I only used my left hand (I’m right handed). I launched applications and switched between windows using the pointer. I maximized, unmaximized, and closed windows.

Though I could accomplish all the tasks I wanted to with GNOME 2, the experience was not ideal. I would typically overshoot targets in the panel menus. Changing the pointer’s direction of travel when navigating submenus required a separate swipe of my finger and was also prone to minor errors. Using the window controls was particularly difficult. It was rare that I could land the pointer on the target with my first attempt. I’d overshoot or head in slightly the wrong direction. And then I’d have to head back again.

Things were undoubtedly better with GNOME 3. Window selection under GNOME 3 was a dream: I just hit the hot corner or windows key and then had nice big thumbnails to click on. I always hit the window I wanted first time. Interacting with notifications was also really easy, thanks to their occupying a large swath of the bottom screen edge. Window management was also much easier with GNOME 3, largely because those three little buttons had gone. The big close button was an easy click target, and I could easily drag the window’s titlebar to maximise or unmaximise without the risk of hitting the close button.

Usability isn’t linear, and the same interface isn’t consistently usable in all situations. Though I do think GNOME 3 is generally more usable, some of its usability improvements only really shine through in particular situations. Pointer control is a good example of this: if you’re an experienced user using a high-precision pointing device, the chances are that you won’t notice some of the improvements in GNOME 3. That doesn’t mean that there aren’t many people who will benefit from these changes though.

This entry was posted in gnome-ux, gnome3. Bookmark the permalink.

15 Responses to On pointer control